Coronavirus Pandemic 2020 - How I am keeping sane 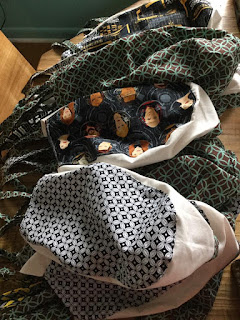 In late January 2020, the media started reporting about this new "flu-like" virus that was rampant in China, the Coronavirus, or COVID 19.  Since I work at a hospital it was easy for me to get information from the physicians about this virus. They said it would be not the normal flu or influenza, but it shouldn’t be too much of an issue. But that was very early in the game.  And very far from the truth.  No one knew.

In the weeks that followed the COVID-19 spread further and faster than anyone realized it would. Borders were closed first with China and then too people coming from China (even if they were US citizens) into the USA. Finally it would end with the USA, along with many of the countries of the world, closing its borders to all.  Cruise ships were stranded without ports of entry as they were closed.  People on the ships died from the disease.  The last time I remember the airport being so quiet was right after the 9-11 terrorist attacks. (I live 6 miles from the Detroit airport, under a flight path - I hear planes.  All. The. Time.)

On March 19, when I left the hospital for a long weekend I was just thinking I would be back to work on Monday.  My weekend started with taking my dogs to the veterinarian for an annual check up. But it wasn’t a normal appointment. I drove to the veterinarian office And called when I was in the parking lot to let them know that I was there. One of the office personnel walked out wearing a mask and took Chloe into the office for her check up. Several minutes later she came back out with the dog, and took my other dog and my credit card into the office. Again several minutes later, Emi was returned to me, with my credit  card and we were on our way.  Very surreal.  I also made a stop at my local meat market and then to the grocery store, most likely for weekend snacks.

The following Monday the program coordinators through the hospital were given the choice to work from home if desired.  The following day, the governor issued a stay at home order, which covered  employees deemed to not be essential employees should not be in the hospital.  Effective that day, it was completely working from home.

Many employees were not able to actually work from home and had to use their vacation time through the generosity of Henry Ford Hospital, employees were granted 80 hours of COVID time off.  This would prove invaluable in the coming weeks.

From March 21st through April 28th, I never left the house.  Well, I might have walked the dogs, or talked with a neighbor across the driveway, but I never left the area.  On April 29th, I went to a local restaurant for Middle Eastern cuisine carryout. While in the restaurant, I was stunned to see 4 persons without masks on!  Don't they know what is going on in the world?  Or don't they care?  I was practicing my social distancing, staying 6 over more feet apart, when another person walked in, and tried to go right up to the counter.  "Yo, dude, there is a line" - he looked at me as if I was insane.  I glared over my mask at him.  Don't fuck with the short lady, I'm from Detroit.

I've been able to keep my sanity by sewing surgical caps and masks for the MICU (Medical ICU) at Henry Ford Hospital.  Dr. Rana Awdish submitted a plea on Facebook in late March for surgical caps and I knew it was something that I could do from home.  Most of my off hours have been sewing, using all of my machines.  It is amazing how my four year old computerized sewing machine wasn't as strong as my 70 year old Singer sewing machine in the multiple layers of fabric in a mask.  That featherweight punches through layers like a boss.

(In the fall of 2018, my friend Susan and I stumbled upon a sale that netted us hundreds of yards of cotton quilting fabric for $20.  Much of this fabric has been used in the making of the caps and masks.  This was a bonus as I sewed and sewed and sewed.)

On May 4th, my hours were reduced by 50%, so I was working 20 hours, using my COVID time off and then vacation time.  It did give me more time to sew.  Hopefully by next week, I will be back to working full time, before I have to look at the budget.

Susan also donated part of her fabric stash and several hundred yards of elastic for the making of masks.  Another welcome gift was a donation by one of my beading friends for the purchase of materials needed.

I've probably completed about 200 caps at this point, about 75 or so masks - at one point, I have stopped counting because the number doesn't really matter, it's the making that matters. In order to get the caps to Dr. Awdish, I have been mailing them to her, so she can take them to the hospital when she works next.  It seemed to be the quickest solution.  I've also mailed caps and masks to New Orleans for a former chief and his wife, made a few for a former fellow for herself and family.  What keeps me going?  Things like an email from a grateful nurse:


"Early on in this Covid 19 struggle it became apparent that we were all very concerned about inadvertently bringing this terrible virus home with us. We were lucky enough to get top notch respirators. However,  wearing the appropriate respirator mask was literally tearing my hair out every time I took it off.

The solution to this issue was to wear a scrub cap...of which I had none and the disposables quickly disappeared. I was too tired each night to try to figure out ordering one online.   Enter Rana with a bag of super cute scrub hats.  I was lucky enough to get a super cute one with red hearts and later another one so that I could change them out.  I simply cannot thank you enough."

(Yes, in my next batch waiting to be mailed, there is one with this nurses' name on it!  I don't know if I made one with red hearts or not, but she will have another cap soon)

Next, my thoughts on things that are going on out there, you know in the real world, not the bubble that is my home.

Places I find interesting and relates to beads!

The bad Liz
I was born and raised in Detroit, Michigan. I am still living in the area, although I spent 3 years in Germany (Stuttgart). Fighting the age long battle against the bulge. Some days I am winning, some days the bulge is winning. I hang out with my dogs (three toy fox terrierists) and husband.